A Taste of the Philippines – Final Two Episodes Released on Australia Day!

A Taste of the Philippines – Final Two Episodes Released on Australia Day! 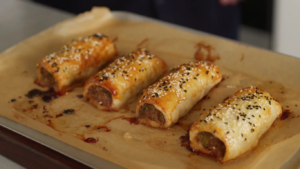 The Australia Philippine Business Council (APBC) in cooperation with the Australia-ASEAN Council presents the final two episodes of its 12-part YouTube Video Series “A Taste of the Philippines”.

APBC President Rafael Toda says “the series has allowed us to showcase these talented Filipino-Australian Chefs from around Australia who have pioneered a new era of Filipino cooking. Some have created mouth-watering Filipino dishes with Australian influences.  Others have taken Australia’s world-renowned produce like Western Rock Lobster from WA, and comfort foods like the traditional Sausage Roll with tomato sauce, and recreated them with traditional Filipino delicacies and ingredients, blended and presented with a modern flair”.

“In the process of exploring the unique tastes from the Philippines and Australia, we took the opportunity to also highlight the natural beauty of the many regions featured, and thereby promoting each regions’ tourism attributes.”

In these final two episodes, we showcase a fresh tomato based chicken stew from Laguna in the northern province of Luzon, and a Filipino inspired Sausage Roll with a native Banana Ketchup!

I would like to take this opportunity to thank the teams who made this production a reality.

Mr Toda said “We would not have been able to produce the series without the financial support from the Australia-ASEAN Council, a division of the Australian Department of Foreign Affairs. The APBC was a successful recipient of grant funding to produce the 12 part series. The objective, to develop a strategy aimed at stimulating trade between Australia and the Philippines post the pandemic. We selected to focus on Hospitality and Tourism, the two hardest hit industries during this time.”

Finally a big thank you to the main stars of the show led by Host and Author Yasmin Newman, and the talented chefs who shared their recipes for our enjoyment.

Episode 1 – Cebu Lechon from the Visayas region, by Will Mahusay of Sydney Cebu Lechon

Lolo and Lola is a Filipino eatery in the nation’s capital. Its world class dishes and baked products give patrons a taste of the motherland’s rich culture, history, and flavours.

Kim Cudia-Prieto is a chef and the owner of Lolo and Lola Filipino Eatery in Canberra. Together with her husband Jay, they are not just serving Filipino fare on a plate but serving up a way to honor everyone’s lolos (grandfathers) and lolas (grandmothers) who are the keepers of Filipino traditions.

Their world class dishes and bakery products give a taste of the Philippine’s rich culture, history and flavors. Lolo and Lola was included in the The Canberra Times’ 2019 Global Food Trends and proving to be among Canberra’s most popular restaurants.

In Episode 11 – Kim shows us how her native Chicken Stew “Kinmamatisan Manok,” from her hometown of Laguna, is created with fresh tomatoes instead of the familiar Spanish influenced “Afritada” which uses tomato paste.

Kim starts by marinating the chicken in soy sauce and “calamansi,” the Filipino version of lemon, before adding the traditional garlic and red onions with the chicken.

Click here and enjoy this unique chicken dish steeped in family tradition form the region of Laguna, located south of the buzzling city of Manila. 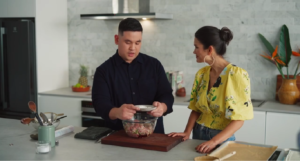 John Rivera, chef de partie, was voted best young chef in the Pacific by unanimous decision from a professional chef jury, based on his Filipino dish ‘sinigang’.

Despite his youth, this chef de partie has already managed to rack-up plenty of formative training in Australia. He counts years of professional experience working in Australia’s fine dining scene, including restaurants Lûmé and Attica in Melbourne plus Dan Hunter’s Brae in Birregurra.

But his latest venture which he launched with pastry chef Minh Duong, is Kariton Sorbetes (Ice Cream Cart), an artisanal gelato brand proudly featuring Filipino flavours. From the simple but timeless ube halaya and keso to out-of-the-box creations like champorado with patis salted caramel and turon garnished with sweet langka and candied sesame seeds. The scoops are a true celebration of Rivera’s rich heritage and love of delicious food.

In Episode 12 – John challenges Australia’s traditional comfort food – the popular Sausage Roll. John replaces the Aussie sausage with a Filipino “longganisa” which is similar to a Spanish chorizo, and dares to replace the traditional tomato sauce with another native Filipino condiment – banana ketchup!  John also sources the pork for the longganisa from Fat Pig farms in Tasmania.

There is no better way to celebrate Australia’s multiculturalism than with a hot Longganisa Sausage Roll, complimented by a Banana Ketchup dipping sauce – on Australia Day!!!

Click here to view this Australian comfort food with a true Filipino influence.

APBC has received grant funding from the Australia-ASEAN Council of the Department of Foreign Affairs and Trade to produce this 12-episode series. Click here to access all 12 episodes.